As with previous debates, the lead up to debate 5 was awash in erasure of Bernie.There was heavy focus on Bloomberg and Buttigieg during the week and Warren, Harris and Klobuchar were all hyped during the pre-debate show.

MSNBC 20 minutes before the debate are talking to voters and the woman says mostly people interested in Biden and buttigie. But as you can see they were a lot of Bernie supporters behind them and this woman was awesome I can’t stop watching this.#DemDebate #Bernie pic.twitter.com/z3CSsekigR

During the pre-debate lead up, about 20 minutes before the debate was to start, one of the most comical visual illustrations of Bernie erasure occurred. A man, later identified as a Dem Party Chairman in MI, uses his body to block a sign, which notes Bernie won ALL 73 Michigan counties in 2016 (and Kent County by 25%!).

The person being interviewed is saying that most people in MI are interested in Biden and Buttigieg. This after MSNBC had deliberately failed to show plentiful Bernie supporters while panning the crowd support for other candidates.

Devon Lamoreaux (@DevonLamoreaux) captured the moment on his phone while watching the pre-debate show. “If we WIN,” he says, “they can’t act like we don’t exist.”

This is not the first time cameras have panned away to avoid showing Sanders supporters during debate coverage.

In the direct lead in to the debate, Steve Schmidt—longtime Republican, who advised both John McCain in 2008 and more recently Howard Schultz, Starbucks billionaire—warns there is a “danger with some of the ideology that we’ve seen front and center in this field.” Schmidt asserted that “a sociopath will beat a socialist, I think, seven days a week and twice on Sunday.” The camera then cuts to Bernie as he prepares on stage, as the perfect lead in to our Democratic debate. 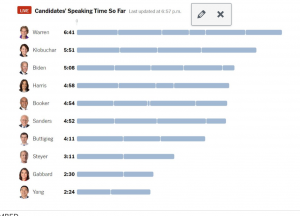 As usual, during the debate itself, Sanders’ speaking time is not commensurate with his status as a top tier candidate.

In keeping with the pattern of previous debates, he came up in the final tally from the New York Times as fourth in speaking time, but his time remained well under many lower tier candidates throughout the course of the debate (like here, about one hour in). His final place in the overall shuffle is always still under his prominence in the race, and he only edges even closer to the top in terms of speaking time near the end–while for broad portions of the conversation he’s skipped over.

This time, the first question related to Medicare For All went to Warren, though Sanders introduced the Medicare for All legislation. He was skipped over on affordable housing (despite his release of an aggressive affordable housing plan), on voting rights, and white supremacy. He also was left out of a racial justice discussion, which Warren was asked to weigh in on. And, was skipped over even when directly name checked by Klobuchar.

While Buttigieg got a pass and was not asked about making up black support for his Douglass Plan. Bernie was asked, as one of only two direct questions put to him, about supporters chanting “lock him up” at one of his rallies. So, you know, it was the typical debate treatment of Bernie. (Full debate transcript found here.)

To Contribute to This Effort:

There are some costs associated with the development and maintenance of the site. Contributions are appreciated.